The annual event celebrating the Global 100 took place on April 19, 2017, at the InterContinental Dallas.

You can read more about this here.

The Direct Selling News Global 100 is more than just a list. It is a celebration of the waf of doing business, that transforms lives. Get to know more about this great industry in this video:

DXN is the 24th biggest direct selling company again according to the newest DSN list.

Here you can find the ranking for the 2017 DSN Global 100 (based on 2016 revenues).
This annual list contains the top revenue-generating direct selling companies in the world. 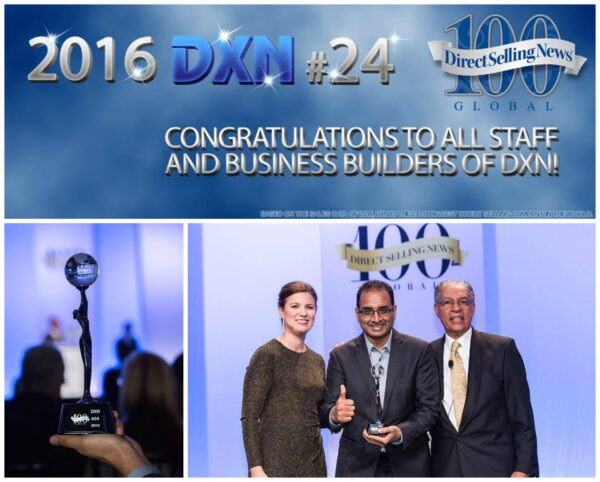 Source of the pictures

DXN continues to maintain the 24th ranking globally, but with an increased Global Revenue of $ 927 million for the year 2016 … Congratulations to all !!!

The official Facebook Page of Direct Selling News is here.

Would you like to be the part of this DXN Success? Join DXN now!

Important:This is a personal website of an Independent DXN Distributor. This is not the corporate website of DXN. There are no income claims, guarantees or promises of any kind. We cannot guarantee your success or income level. The information relating to DXN Products and/or DXN itself on this site are not intended to diagnose, treat, cure, or prevent any disease or replace medical advice or treatment. The information presented on this website is for informational and educational purposes only and is not intended as medical advice or a substitute for a physician's consultation and/or examination. You can find the official DXN homepage here: https://dxn2u.com/
This website uses cookies to improve your experience. We'll assume you're ok with this, but you can opt-out if you wish. ACCEPT Cookie settings Reject Read More
Privacy & Cookies Policy